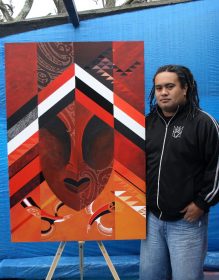 After two years working in Dubai, Hiwirori Maynard (Rongowhakaata) is glad to be home. He was contracted to perform as part a four-person cultural group named Te Mana at the JW Marriott Hotel. He was well-trained for this having performed with Waihirere at Matatini (or the Aotearoa Maori Performing Arts Competition as it was then) alongside teaching in Gisborne. The Marriott has been home for Hiwirori a number of times over the years with different stints there in 2008, 2009-10, 2011-12 and most recently 2015-17 when he finished as Band Leader of Te Mana.

Hiwirori originally trained in the late 1990s at Toihoukura with Sandy Adsett, Derek Lardelli, and Steven Gibbs finishing with a Maunga Kura Toi Bachelor of Maori Art in 2004. Since then he has been working mostly as a kapa haka and art tutor in a range of schools including Te Aute College (2012-15) alongside maintaining a constant art practice, exhibiting across the country and working on commission, including Hakirirangi for Te Papa Tongarewa (2017) and MOKO Guitars (an example is below) for Hukarere Maori Girls College.

Those of us at Toi Iho look forward to seeing his new work. 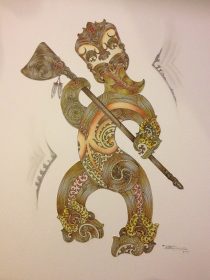 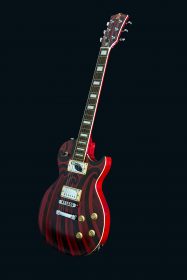 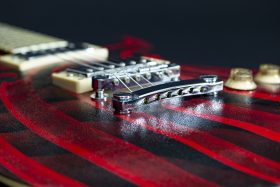 Congratulations Te Waka Toi Awards 2019, many of whom are exemplary Toi Iho Artists.